It’s been almost two years since my husband and I transitioned our nine-year-old dog to a vegan diet. This time has been filled with curious questions, skepticism, and a great deal of criticism from omnivores and vegans alike. Although we do our best to ignore the disapproving looks and comments, I’ve realized that it makes more sense to do my best to explain. So here goes. Please reserve your judgement until the end!

I don’t want to brag, but Rigby is a great dog. We adopted him nearly seven years ago from a shelter in Chicago because of his shaggy black hair and adoring eyes. He was two and he was a challenge right off the bat – plagued with acute separation anxiety, under-socialized to the point that he lunged at everything on four legs, and (the easiest challenge to tackle) a leash-puller. But over the years he’s spent with us, he has turned into a therapy dog who travels the world and he’s had a bevy of four-legged housemates including, currently, a one-eyed rabbit named Monty.

I say all of this to explain that Rigby’s health, well-being and general happiness matter to us. He is always on our minds and we turn down many an invitation out to stay home and snuggle him. He is a member of our family and we treat him as such.

When we went vegan, it was a world shift. We’d been vegetarian for years, but had only recently understood the true impact of dairy and eggs and it was the logical next step. I’m not sure who among us raised the idea of changing Rigby’s diet. He’d always had an unhappy stomach, no matter how many supposedly healthy dog foods we tried to feed him, so we didn’t think there was much to lose. But we didn’t know much about vegetarian, let alone vegan, dog foods. We went to work researching.

What we discovered was — to put it frankly — disgusting. Commercial dog food can in no way be classified as “food” for anyone, including dogs. The ingredients include scraps from the slaughterhouse floor; expired meat from supermarkets; bits of cancerous flesh and downed animals deemed unfit for human consumption, which are sifted to get rid of hair and then rendered (boiled for several hours); bits of flesh, brain, and skin that come off during the centrifugal separation process; and traces of euthanasia liquid and flea collars. Why are there traces of euthanasia and flea collars in dog food? Because sometimes the bodies of euthanised animals from shelters are ground up and used as filler.

All of the above was enough of a reason for us to switch Rigby’s food. But why vegan food? Why not raw meat or those expensive venison logs at the high-end pet stores? Well, for one thing, we’re vegan. We try our hardest not to support any industries that profit from harming animals. For another, it’s expensive. Some people may argue that vegan dog food is expensive and it certainly is more costly than the commercial brands that keep their food cheap by sweeping the slaughterhouse floor for scraps. But we’ve always been willing to spend more on food (and less on other things) in order to support vegan companies and brands. And we have actually ended up saving money because my husband now prepares our dog’s food from scratch. All the ingredients are organic and we try our best to purchase from local vegan businesses. Rigby’s food costs about $7 per week.

They actually don’t. What dogs need are nutrients. They evolved to be scavengers that can subsist on almost anything. How they derive their nutrients is beside the point. The same goes for cats (although I’ve heard that transitioning a cat to a vegan diet is more difficult and I have no personal experience with it). Though taurine is essential for cats’ diets, the process that commercial cat food goes through actually removes any naturally occurring taurine, so a synthetic version is added after processing anyway.

The argument that vegans live unnaturally is not a new one. Omnivores suggest that taking B12 supplements is not natural. If you drink nut milk instead of bovine milk, it’s not natural. If you feed your dog anything other than the commercial brand kibble, it’s not natural. Well, very little we do is natural anymore. We fly through the sky in steel contraptions. We explore the deep sea. We live in places that humans normally wouldn’t be able to survive because we’ve found ways to generate heat that our ancestors would certainly have deemed unnatural. And we keep ourselves alive using chemicals and pills that are the furthest thing from natural. There’s really no need to measure anything on a “natural” scale – we all fall short most of the time.

Back to Rigby. His current food is made up of half dry (a kibble we bake at home) and half wet (a cooked vegetable mixture recommended by Vegedog), so that he can enjoy the best of both worlds and keep his teeth clean. Between both types of food, he consumes a wide variety of ingredients to ensure he gets all the nutrients he could possibly need, including: fresh (dog-friendly) vegetables, hemp seeds, flax oil, nutritional yeast, Vegedog supplement, vital wheat gluten, acidophilus, probiotics, cranberry extract, lentils or other beans, brown rice or quinoa, apple cider vinegar and ginger. We generally set aside a few hours on a weekend day to prepare a massive amount of food (most of which we freeze); this lasts us the better part of a month.

But I’m forgetting one last thing: Rigby’s happiness. Dogs love meat. How could I deprive my dog of something he loves?

First of all, what dogs love about kibble is actually an addictive, synthetic substance called digest, a byproduct of the rendering process made up of a variety of animal tissues, which is added after the fact to make these scraps more appealing. Second of all, would you be happy eating kibble for the rest of your life? We switch up the flavors in Rigby’s food with every batch to figure out what he likes and what he doesn’t, and to give him some variety. If you truly want to give your dog what they want, you’ll be feeding them from your plate – dogs don’t want kibble, they want your sandwich.

Finally, like most dogs we’ve taken care of, Rigby loves veggies. He always liked carrots, but his palette has expanded to include raw broccoli, Brussels sprouts, red peppers and cabbage. We’ve also invested in a few vegan brands of more traditional types of dog treats made by Benevo, Soopa, Antos and v-dog. He especially likes Benevo’s Pawtato Sticks.

Please understand that I am not telling you what to feed your companion animals. I’m simply explaining why we feed Rigby what we do. We wish — just like with our own switch from vegetarianism to veganism — that somebody had told us what we were feeding our little boy a long time ago. But we’re grateful we know now, and we want to make sure other people know, too.

Our domesticated animals eat what we give them — that’s the nature of this strange relationship we’ve manufactured — so we have a responsibility to make sure that what we give them will make them not only happy, but also healthy. And that’s exactly what Rigby is.

I realize much of this might come as a shock. So if you’d like to learn more, I recommend reading Obligate Carnivore: Cats, Dogs, and What It Really Means to Be Vegan by Jed Gillen, reading dog food reviews from Dog Food Advisor or simply Google “what’s in dog food.” I’ve included the recipe for Rigby’s wet food below (adapted from a PETA recipe here: http://www.peta.org/living/companion-animals/say-kibble-vegan-dog-food-recipe/#ixzz3BCxXKDgf) if you’re feeling adventurous! Happy cooking :)

• 6 cups water
• 1 cup mixed brown rice and quinoa (or other grains)
• 1 cup mixed lentils (or other beans!)
• 3 medium sweet potatoes sliced into 1-inch cubes / I usually use 1 sweet potato and then a mix of other veggies, such as brussels sprouts, broccoli, kale, carrots, etc.
• ~3 tbsp. ginger, to taste
• 1 cup natural peanut butter (we use way less and add in some oil)
• 1 tbsp apple cider vinegar, optional (helps alleviate gas)
• 8 g hemp protein (you can find hemp flour in health food stores)
• 1 Tbsp. ground flax seed
• 200-250 mg cranberry extract (Since a vegan diet is alkalizing, your dog may need this acidifier to maintain a healthy urinary pH)
• VegeDog multivitamin powder, as directed
• 125 mg probiotic (1/4 pill) or some other type of digestive aid
• ¼ cup nutritional yeast
• For flavour I usually also add some liquid smoke and possibly some cinnamon or other dried herbs

Directions:
• Boil the water.
• Add the rice, lentils, sweet potatoes, and other veggies.
• Reduce the heat and simmer, covered, for 40 minutes to 1 hour, or until all ingredients are soft. Stir occasionally and add more water as needed. Too much water is better than not enough water (remember, you want the ingredients to be extra moist because they will be easier to digest).
• Mash the sweet potatoes with a fork and mix thoroughly. Let cool.
• Add the remaining ingredients and stir well.

Place 3 to 5 servings in your refrigerator and store the rest in the freezer. 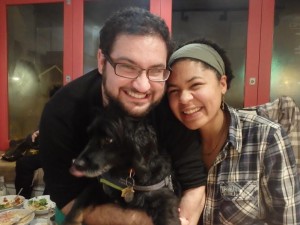 Jordan is an animal welfarist turned animal rights activist and she credits her volunteer experience at a vegan animal sanctuary with that shift. An editor with a Master’s Degree in Creative Writing, she and her vegan husband and dog recently moved from the US to the UK and they’re enjoying exploring England (and beyond!).