Vegan Publishers had the pleasure of interviewing Shaun Monson, creator of “Earthlings.” We had a chance to learn more about his new movie “Unity” and what needs to be done before it’s ready for release! 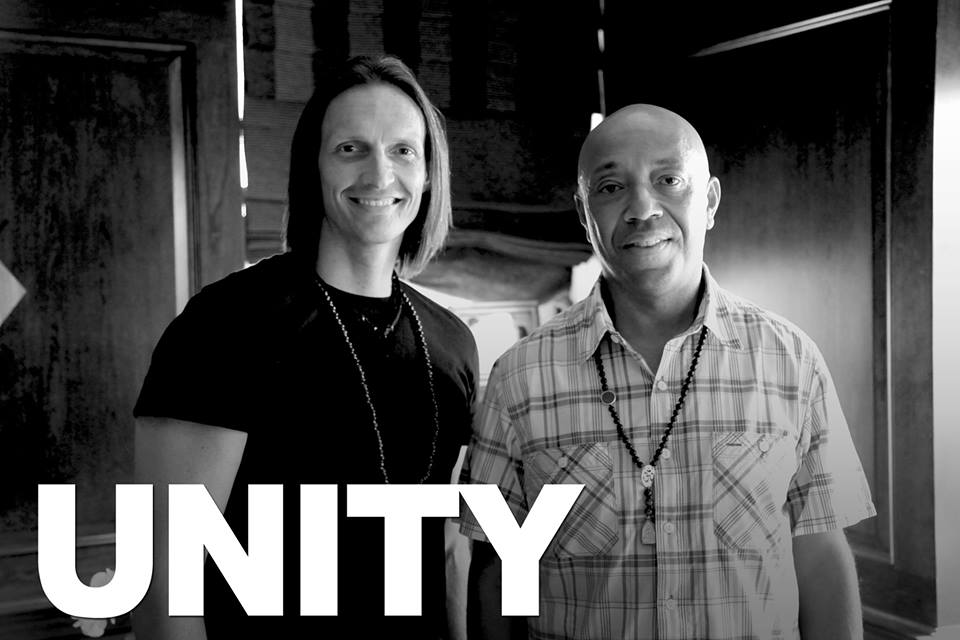 VP: What is Unity?

SM: Unity is a follow-up film to Earthlings.  It’s a film about perceptions, and why we always perceive opposites in one another, expressing empathy for some beings, but then apathy for others.

VP: What do you hope to accomplish with this film?

SM: The film’s principle intention is to cast a light on this contrast between apathy and empathy. It’s the in-group or out-group mentality, as Joseph Campbell illustrated. There is a formula to civilization. Wherever people are, they say, “This is THE society.  All others are indifferent toward us.” One notices bounded horizons. The horizon of the group, the tiny little clan, the larger village, the still larger tribe, the nation. Each with its boundary, its horizon. And the inevitable tendency is to try to bring the sentiments of love and affection and benevolence into play on the “in group,” and project upon the “out group” all the attitudes of aggression. This has been the formula throughout the history of man. There have always been in groups and out groups. And all of our rites, symbols, traditions, etc., have been devoted to the task of representing ours as the good society and the others as the bad. This perception holds true for other beings as well.

When will civilization evolve, (which always begins with the individual) into the recognition of absolute existence, of a spectrum of life, and no more separation based on form or boundaries? That’s what Unity is about and what we hope to accomplish with the film, at least on some small scale. 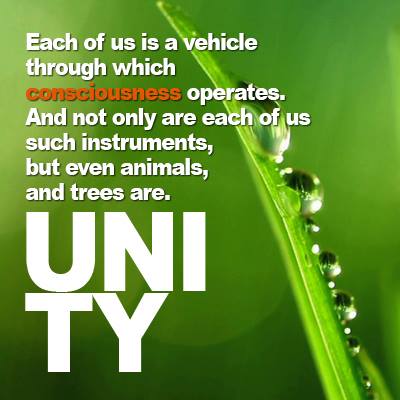 VP: Earthlings has had such a huge impact on increasing awareness about atrocities committed against animals. How does Unity relate to Earthlings?

SM: Both films are about compassion. Both films also have titles that cannot be divided into races, cultures, classes, divisions, shapes or species. Earthlings asked viewers to be kinder to animals by showing us a glimpse of their world at the hand of man. Many people have asked me to make an updated version of Earthlings, with newer footage, newer atrocities, all in high definition. We are actually working on an updated version of Earthlings for the 10 year anniversary edition in 2015. But for Unity, the idea was to ask viewers why its justifiable to treat certain beings with utter apathy.  In short, Unity is about duality.

VP: Tell us about the process in making the film. It sounds like an enormous undertaking.

SM: Originally, I thought it’d be a sort-of ‘think piece’ about the state of humanity, and why we’ve been at war for 95% of recorded history, or why (despite the advent of religion and philosophy and technology and science) we still can’t get along with each other, or the animals, or our environment, or unshackle ourselves from this never ending ‘us-against-them’ perception. The manuscript broke down into a 5 hour mini-series, which I recorded as an audiobook in 2008, just as we embarked on shooting. Eventually, this had to be narrowed down into a 2 hour film or less. In fact, the current running time is 92 minutes.  (We will release an extended cut down the road.) So it’s a very stream-lined version of the message of Unity.

It was difficult to shoot and edit because even though I travelled quite a bit initially (to Africa, India, China, Europe) I could never truly capture, as a foreigner, and in the short time I was there, what the people indigenous to these regions were seeing and experiencing. So I began to seek out footage from others, which was a form of unity too, because the visuals of the film were a contribution by many. The editing was challenging as well since I don’t tend to do interviews.  Interviews help fill up a documentary. But in Unity, as with Earthlings, every line of dialogue required an image to match it. I couldn’t just cut back to a talking head.  This isn’t to say that formula doesn’t work on other docs. It works beautifully. But for these films I decided to make it harder on myself, I guess.  Ha!

Lastly, there’s the narrators. I thought it would be interesting to have a chorus of voices acting as one voice. This was equally difficult since all of the narrators (we have 80 of them) were recorded independent of one another. Each person read a page or two, their dialogue coming from selections throughout the script. Some people speak louder than others, some softer, some faster, etc., their intonations or inflections, their rhythms, what have you, all of this made the editing of the narration alone extremely time-consuming. It took me 2 years to record and edit just that component of the film. There was also no guarantee that it would work. I showed a rough-cut to our investors when I had about 35 voices in it, and no one was impressed but me. Ha! Most of them felt this was folly, and I should abandon the idea all together. But, of course, I pressed on, more than doubling the amount of voices, because I just felt there was something special about it, and that it would bear fruit in time. 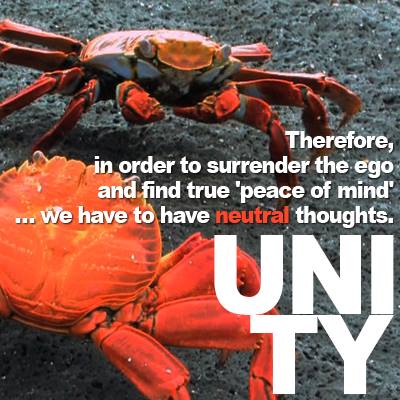 VP: Is Unity a reflection of your own personal philosophy?

SM: I hope not. There are enough concepts in this world already. Almost everything we do is based on a concept, something we’ve been taught or heard someone else say. Lord love us, we’re all parrots in this sense, walking around, quoting and repeating each other in an effort to sound wise. Heck, I just quoted Joseph Campbell earlier in this interview. We all do it. But I have no intention or desire of propagating any personal philosophy. Unity is intended to be absolute fact. It’s approached scientifically. But it also addresses experiences in life that go beyond facts, or beyond our five senses, beyond things we can explain or prove. Unity touches on the mysteries of existence, and how short our lives are (measured in decades really), and asks, if all this give-and-take is the ultimate purpose of being human.

VP: We are all very excited to see the film. What is left to be done before it’s released?

SM: We are clearing our final soundtrack, which is time-consuming since we’re a small budget film. By that I mean that bigger budget films, films that offer to pay more for music, get cleared quicker. Films with smaller budgets, well, those requests tend to go to the bottom of the stack. This happened on Earthlings too. Moby was fantastic, don’t get me wrong, and granted permission early on for that film. But the publishing companies who also own that music, they took their time.

We also have some final graphics to do, mostly with titles, and there are some technical glitches to sort out, since we have footage from all over the world, which means different formats, different frame rates, different aspect rations, different codex, etc. So the cut is done, and I’m very happy with it, (as a 90 minute version). Now we just need to up the resolution for wide release.

VP: Are there any other films that have inspired your work?

SM: Many. When I was a kid, just as I was becoming a teenager, I didn’t want to be a superhero. I wanted to be David Lean. I guess more than individual films I’ve been inspired by filmmakers: Orson Welles, of course, since he was so, so far ahead of his time. Spielberg, without question. Kubrick, Ridley Scott, just to name a few. But I don’t know if any of these examples have to do with making documentaries. Nevertheless, they were definitely influential in learning how to find a way to reach audiences. 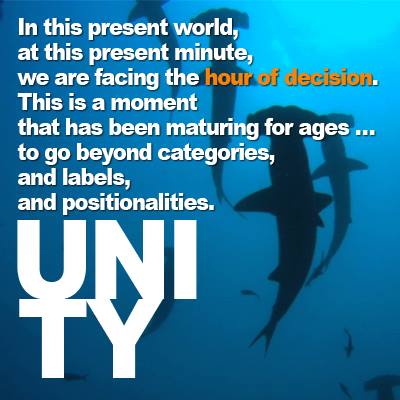 VP: Can you tell us about any future plans after Unity?

SM: I’ve already written the next two films for Nation Earth to produce, (that’s our production company). They’re done and ready to go, and I’m currently writing a third. So we will start focusing on those right after we release Unity.

VP: Who is your favorite author?

SM: I have 4, and in no particular order.  Joseph Campbell, as mentioned earlier. I have all his books. Couldn’t pick a favorite. David R. Hawkins, whom I had the good fortune to interview twice before he died last year. If you want to read an excellent book of his about raising consciousness, check out The Eye of the I. Sri Nasargadatta Maharaj is who I’m reading at the moment. I’m on my 4th book of his in a row. Incidentally, he never sat down and wrote any books. He gave talks and people recorded them. This man is enlightened. Very advanced. Prepare to have all your identities shattered. But it’s truth. And lastly, Krishnamurti, whom we quote in the film. Check out his book “Freedom From the Known.”