Read all about this must-have book for vegans over 50, written by renowned vegan authors Carol Adams, Patty Breitman and Virginia Messina. Together, their experiences over the years prompted them to write this book that addresses the specific nutritional and social issues for vegans over 50. 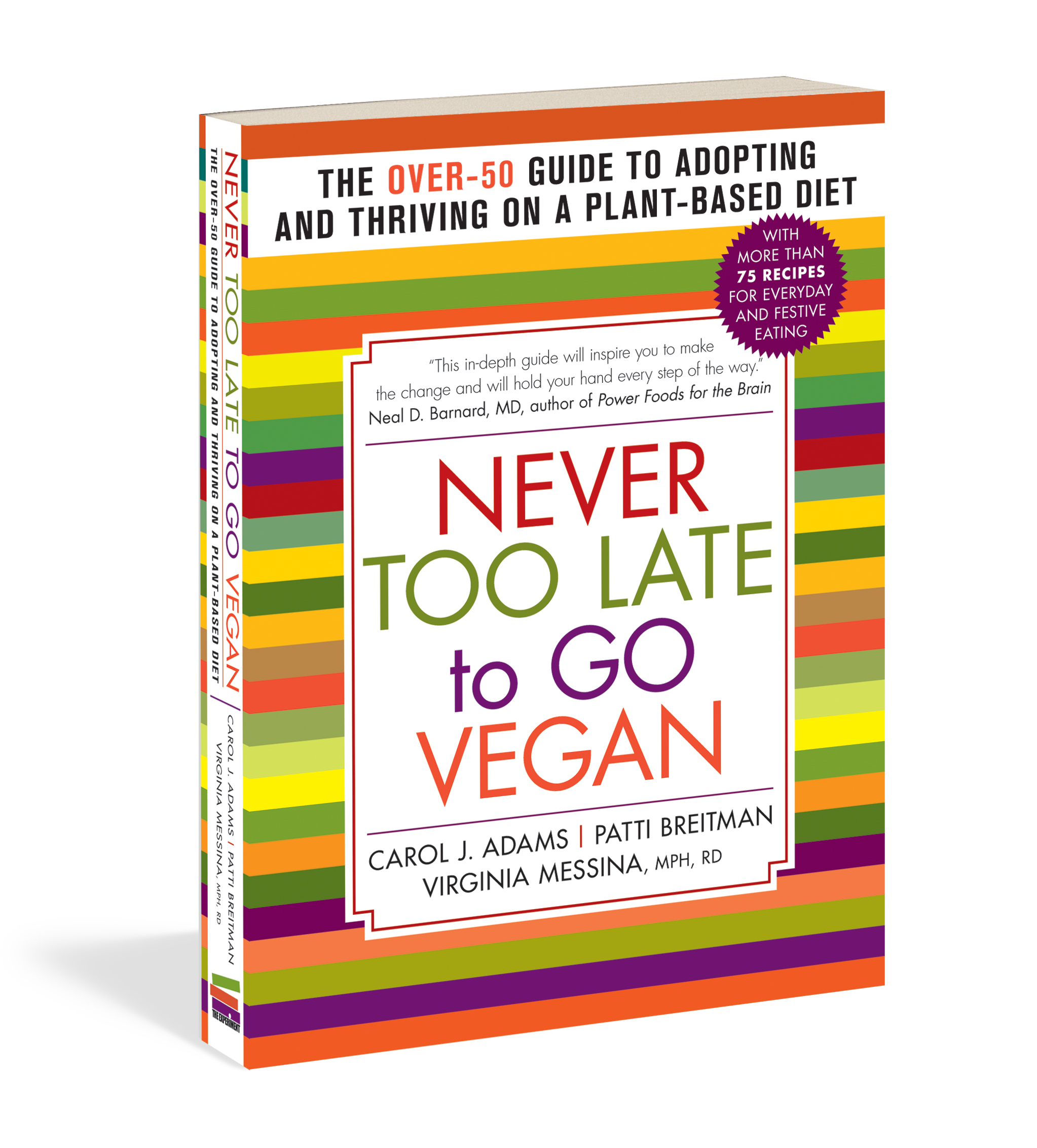 I am so pleased that Never Too Late to go Vegan is just now hitting bookstores, on the shelves and online. Patti Breitman, Ginny Messina, and I wrote this book because we realized nothing was available that addressed the specific nutritional and social issues for people over 50. In fact, it was when there was a discussion about osteoporosis among long time vegans on my Facebook page that we realized a book like this was needed! When we compared notes, it turned out that Patti, Ginny, and I have lived a combined 75 years as vegans. Our experiences over the years prepared us to write this book.

Certainly, popular media has discovered veganism—and we’re thrilled about that. But, the take away from popular media is often that vegans are young, celebrities, “power vegans” or all three.

We wanted to speak to the people who tell us “I’d be a vegan if only you did the cooking for me!” and show them how easy it is to prepare vegan meals. In fact, we have an entire chapter on veganizing traditional foods, because we assume that over-50s probably already have some favorite recipes. We offer hints at quick meal preparation for those who never fell in love with cooking.

We also wanted to speak to people who confuse aging with becoming ill or getting chronic diseases. Choosing a healthy, vegan diet helps reduce our risk of heart disease, stroke, diabetes and perhaps cancer. Science continually confirms the myriad benefits of eating whole foods from the plant kingdom

Further, we wanted to speak to the people who are afraid to learn about what is happening to animals. We begin our chapter on why someone should become vegan saying that we know people over 50 have experienced grief in their lives. We try to show how we have lived long enough to know that grief is endurable; that it is a part of living. We know that our capacity to endure and recover from bad news is stronger than we once thought.  As we mature we are asked to live with our eyes and hearts wide open. We are old enough and, having seen our share of tragedies over the decades, able to handle the information about why vegan.

We provide interviews with over 50 vegans throughout the book to help others see how and why individuals go vegan.

Perhaps the most innovative chapter is on veganism and caregiving. We realized that we needed to offer a theory and practice of vegan caregiving, as it is often the over-50s who are caring for elderly relatives. This chapter is born of the hard experience of being a vegan caregiver. When we started writing it, we didn’t realize how much there was to say! But from making sure you have healthy vegan food while dealing with a relative’s health crisis to how veganism may be the one thing you can do for yourself during any day of caregiving, we found that, in fact, we had a lot to say! We also provide information on foods that can help with stress and address the questions: What if you become ill? What if you need health care in a rehab or nursing home facility?

Many people in their fifties, sixties, seventies and beyond mistakenly believe that their influence in the world is less than it was in the past. We want to reassure new vegans, bust everyone’s notions of what aging looks like, show how to prepare scrumptious food, and help readers rediscover one of the most precious, life-affirming parts of themselves.

It is never too late to go vegan because the benefits to your health, the planet and animals begin whenever you stop eating animal products.  Until now, while there were scores of books for vegans of all stripes, none addressed the concerns and interests of mature vegans. Ginny, Patti, and I wanted to rectify that because one of the things we know is with age, wisdom, with wisdom, vegan.

Carol J. Adams is the author of The Sexual Politics of Meat: A Feminist-Vegetarian Critical Theory, now in a 20th anniversary edition from Bloomsbury. It has been translated into several languages including Turkish, Portuguese, Korean, Japanese, and German. She is also the author of Neither Man Nor Beast: Feminism and the Defense of Animals (1994), The Pornography of Meat (2003), and co-editor of Animals and Women (1995) and The Feminist Care Tradition in Animal Ethics (2007) (both edited with Josephine Donovan). Her books Living Among Meat Eaters: The Vegetarian’s Survival Guide and How to Eat Like A Vegetarian even if You Don’t Want to Become One (co-authored with Patti Breitman) provide guidance on living and eating well as a vegan. Coming in the summer of 2014 is Ecofeminism: Feminist Intersections with Other Animals and the Earth (with Lori Gruen). She has been a keynote speaker at academic conferences in the United States, Canada, Sweden, Great Britain, and Australia. She has published close to 100 articles in journals, books, and magazines on the issues of vegetarianism and veganism, animal advocacy, domestic violence and sexual abuse. She has shown The Sexual Politics of Meat Slide Show on more than 100 campuses throughout the world. She is working on a memoir of caregiving.