Today we are proud to feature an excerpt from Jasmin Singer’s powerful essay from Circles of Compassion, “The Gay Animal: A Personal Exploration of Interconnections.” Jasmin bravely discusses how a personal trauma helped her better understand the trauma that animals experience on a daily basis.

Excerpt From: The Gay Animal: A Personal Exploration of Interconnections

Like so many kids who go off to college, woefully immature in some ways, yet pretending to be adults, I wasn’t thinking clearly at all. My lingering depression and poor self-esteem led me to a therapist who prescribed “mood-stabilizing” medication that made me stop functioning pretty much altogether. I recall standing in my early morning jazz dance class as my classmates did the routine all around me. I just stared, unable to move. When my academic advisor expressed concern about my behavior, I told him that it wasn’t that I wanted to die, but I didn’t want to live.

I left school midway through my sophomore year with the goal of taking a semester off, moving back in with my mother and stepfather, and then resuming college somewhere in magical New York. A week after leaving Philadelphia, I was browsing in a used bookstore when I started chatting with the long-haired guy working behind the counter. His name was Joe, he was an “older man” (all of 35), and after some friendly chitchat, when he asked me out on a date, I jumped at the opportunity. My boyfriend and I had broken up in the midst of my latest depressive episode, and getting attention from a man felt validating. Referring to my then-plump frame, my secret source of shame, Joe told me that had I been around in the 1940s I could have been a model.

A week later, following our date and on an appropriately rainy and eerie night, I went to Joe’s house. This became the scene of my date rape, a 2 a.m. struggle where I, at age 19, could not get him to stop penetrating me — despite yelling “no” several times. When he was finished, I threw on my clothes and staggered outside. Joe shut the door behind me, and when I squinted through my tears to look back at this house where a piece of me had been forever lost, I saw the sign on the front of his door. It read, “U.S. Army: Forever Straight.”

Every year, about one in eight college women is raped — 85% of them know the rapist. While my trauma was deeply personal, it was, again, also common to many others like me.

Somehow, the months passed. I got a part in a play and steadfastly auditioned for new schools where I could finish my B.F.A. The night with Joe lived in my nightmares and my body. Like a third of rape victims, I suffered posttraumatic stress disorder. I also blamed myself for the crime against me.

That fall, I moved to Brooklyn and started over at a new college in the City of My Dreams. I was in New York now, and it was time to create a new existence, and a new self.

One Sunday afternoon, I met my friend David — a comrade from Nitestar — in Central Park for a picnic with his friends. I recognized Marisa immediately, even though I had only previously heard of her. She was the woman with whom David was infatuated. I could see why, too. Marisa was nothing short of stunning — with long blonde hair, brown eyes, and a t-shirt with a picture of a pig that said, “Friend, Not Food.”

Marisa pointed sternly at David. “You’d better eat the rest of that sandwich, David, I’m telling you . . . ” David had been about to throw a quarter of a tuna melt in the trash. “Those tuna fish died for your sandwich. Do not waste them!”

Who was this woman? “Jazz, this is Marisa,” David said, a few minutes after finishing his lunch. “She’s that vegan friend I told you about.” David tried to hide a conspiratorial smile.

A month later, I ran into Marisa in the packed waiting room at an audition for an Off-Off Broadway play. We momentarily chatted, both of us relieved to see a familiar face in a sea of nervous actors. After getting about 15 seconds into my monologue before the director said, “Thank you for coming. Next!,” I left the audition and walked through Times Square, thinking about the fact that Marisa was vegan. “How extreme that is,” I said to myself, “how radical of her . . .” Yet at the same time, I found myself — for the first time ever — giving thought to the ethical implications of the dairy and eggs that I consumed regularly. I had been a vegetarian for years, but I had never given any thought to animal products besides flesh.

Marisa and I became friendlier, and, at some point, even wound up in an ill-fated weekly “knitting circle” where I quickly learned that I was terrible at knitting. (I was, however, remarkably astute at creating large knots.) Meanwhile, Marisa took any opportunity to eagerly explain why she was vegan. I listened intently and thoughtfully, yet somehow got it in my mind that the word “vegan” was something that defined the other — certainly not me. The internal conversation I was having about the label “vegan” was very similar to the one I’d had (and was still having) about the label “gay.” It was something another person was, not something that belonged to me. The weight the label carried was too grandiose and too limiting. I shook off these thoughts.

A few days later, I attended a screening Marisa was hosting of a new film that focused on factory farming. I went with Owen, the guy I was fleetingly dating. Owen and I held each other for dear life and watched as tiny birds’ beaks were cut off by searing hot irons without anesthesia, a standard practice for the production of egg-laying hens (performed so they don’t peck each other when they are crammed into small cages with up to a dozen other birds). We watched in horror as dairy cows gave birth to their babies, then bellowed as the babies were ripped from them immediately — the boys sent to a horrific life in the veal industry, the girls fated to their mothers’ existence as dairy cows: routinely forcibly inseminated so they would produce milk that humans would take, though it was meant for their calves. The contraptions these cows were attached to, I learned, were named — by the dairy industry itself — “rape racks.”

My own experience five years prior came flooding back to me. Memories of meeting Joe at the bookstore. At his house, on his couch. Shouting “no.” Feeling him inside me, over me, on top of me. The anger in his eyes, the reality sinking in. Staggering to the door, to my car, to my life that had suddenly erased me.

Owen held me closer as tears streamed down my face. I watched the screen and saw the cows bellowing as their newborns were torn away from them. I watched pigs scream as a bolt gun, intended to render them unconscious, didn’t do the job. I watched as newly-hatched male chicks were suffocated in garbage bags.

It was all against their will. I wondered for a moment if these animals who were born as prisoners even had a will. I shook my head at myself; of course they had a will. These animals had a will to survive! That’s why they had to be pushed, forced, prodded — all while adamantly protesting — to meet their horrid fate.

I squinted to look more closely at the screen, which now showed a farmed animal sanctuary. Farmed animals were being given a second chance at a life of peace and dignity.

My tears were replaced by a fierce determination. Suddenly, it all made sense.

What made it okay for me to consume dairy and eggs? What had made it acceptable to consume the flesh of animals? Why was I, why was anyone, able to get away with not thinking about it?

What made it okay for Ryan White to be expelled from his middle school because he had AIDS?

Why is it that every two minutes, someone in the United States is sexually assaulted? Why is it that, like my rapist, 97% of the attackers will never spend a day in jail?

What made it okay for the students at the schools where I had taught to get a lesser education than I had received?

The answer, I realized, was that the same mindset leads to every one of these injustices. In each example, the marginalized group — be they people of color, LGBT folks, women, or yes, even animals — was “put there” by the same rationalization. “They” are less than me, beneath me. “They” are different from me. “I” am the status quo because I have the blessing of God, or because I need to take care of my own, or, at its simplest, because I have the power. “I” can do whatever I want to “them.”

The film was over, but I couldn’t move. “You coming?” Owen asked in a gravelly voice, clearly also affected by the film.

“Yeah, sure,” I managed, acting as normal as I could, yet knowing that things would never be the same again.

If you enjoyed this blog post and would be interested in reading more compelling essays from various other vegan authors and activists- you can order your copy of “Circles of Compassion: Essays Connecting Issues of Justice” here–> http://bit.ly/1A9UEDH 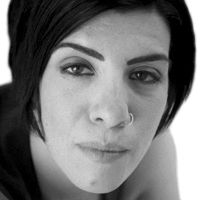 Jasmin Singer is the Executive Director of Our Hen House –

www.ourhenhouse.org – a multimedia hub of opportunities to change the world for animals. She is the co-host of the Our Hen House podcast and the Our Hen House TV show (a co-production with Brooklyn Independent Media). Jasmin has appeared on The Dr. Oz Show, HuffPost Live and in the documentaries Vegucated and The Ghosts In Our Machine. Most recently, she was published in Defiant Daughters: 21 Women on Art, Activism, Animals, and the Sexual Politics of Meat (Lantern, 2013) and will soon be published in Running, Eating Thinking (Lantern, 2014).