After seeing one too many posts from “ex-vegans,” I decided to host a worldwide short essay contest titled: “Why You Will Always Be Vegan.” Many hundreds of essays came pouring in from around the world. Over 50 winners received a gift that was offered by participating vegan businesses. After reading through the first 30 winners one night I realized that the essays could all be compiled into one inspirational book. Recently released as an Amazon.com eBook, this outstanding compilation of short essays from many regions of around globe is dedicated to the preservation of what it means to be vegan. Below I present four of these essays from the eBook. 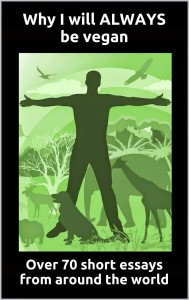 It’s been nearly 14 years since I had my vegan epiphany and vowed to never again partake of or participate in anything offered by the machine of violence that we call the animal industry. Since that time, my understanding of veganism has continued to grow and deepen, until it has become such an integral part of my ethics and my values that I can no longer imagine being able to separate from it, and still be able to look at myself in the mirror with a clear conscience. To no longer be vegan would mean to deny the most obvious truth I have ever learned, and to turn my back on every single animal who is counting on me and others like me to advocate for them in a world where they are seen as disposable objects rather than sentient individuals.

To no longer be vegan would mean to pretend that I do not know what is really going on – on the farms, in the hatcheries, in the slaughterhouses, in the laboratories, in the oceans, and everywhere else on this planet where animals are treated as resources for us to exploit. To no longer be vegan would mean to deny my true nature as a person who can feel for the pain of others, and who aspires to live as peacefully as she can in this far from peaceful world. To no longer be vegan would mean to return to a world of darkness, for it would require me to close my eyes to the light of moral progress that illuminates the way forward to a better world for us all. But perhaps an even more saddening thought is that it would require me to extinguish the light of my own integrity, which is the source of my faith in myself, and which I count on to show me my own next steps on my way to a better self. ~ Angel Flinn, Hawaii

One day in March 2007, when I was 13 years old, I decided to go vegan. Simply because I knew it was the right thing to do. Why should I participate in horrible violence towards other animals when there was absolutely no necessity to do so? It just didn’t make sense to me. So, overnight, I became a vegan and stopped participating in animal use for food, clothing, testing, entertainment and any other purpose. Seven-and-a-half years later, I am still vegan. And I can say with absolute certainty that I will always be vegan. Because it isn’t about me.

Veganism is the recognition that other animals are sentient individuals, just as we are, who deserve to live their lives free from enslavement and exploitation. They are the victims of our non-vegan choices. And when there are victims involved, a choice is not personal. It is not something as simple as choosing what music to listen to or what colour t-shirt to wear. Whether we want to believe it or not, the simple fact is when we purchase non-vegan products, we are actively participating in the harming and killing of others.

How could I ever go back to that? To deciding that the small, personal benefits I might get out of using animals is more important than their lives? I have seen the fear they feel when they are about to be killed. I have watched them struggle and fight for their lives. I used to disregard that suffering and push my feelings away. To do what everyone else was doing. But I refuse to do that anymore. Using nonhuman animals may be the norm, but that does not make it right. Those lives matter. They are not ours to use and do whatever we like with. I will always be vegan. It is who I am. It is not a diet. It is not a lifestyle. It is a stand for justice. ~ Emmy James, Waikato, New Zealand

It is simple, really–once you respect the rights of others, how do you stop respecting them? Just like almost everyone else, my potential for compassion was hobbled at a young age. I grew up on a mountain, around hunting, and went to school with farm kids. I saw the victims on farms in herds and flocks, their individuality ignored. I even personally murdered some animals. I have a lot to feel guilty about. It was not until I met my husband, Shelby, that I started to understand compassion for those who are not human. Shelby’s experience with other-than-human persons growing up was more compassionate than mine, and his knowledge of them through reading was extensive. Listening to him I learned so much about the sentience and majesty of other animals, and I grew to respect them a little. It took a bumper sticker to jolt us: “If you love animals, why do you eat them?” It took us three months to stop eating their flesh and wearing their skins. Over the next three years, I learned a lot of details of all forms of animal exploitation and other avoidable harms. I became an activist, unlearned speciesism, and I finally became vegan. I did it so gradually, thinking the entire time that I could not do it, that I don’t even know for sure when I was vegan, but I have decided it was the fall of 2004. Unlearning speciesism is the foundation of veganism, connecting one with the world in an amazing and complex way. I now know that everyone has an equal right to live free from exploitation and other avoidable harms, including a right to their share of a healthy planet. How could I ever feel differently? ~ Lisa Qualls, Reston, Virginia, USA

Since I was a little child, I have always loved animals – well, I thought I loved “all animals”, but in reality I only loved and respected dogs and cats. I ate meat, dairy and other products of animal exploitation. I didn’t know better, I didn’t make the connection between what was on my plate and the lives that were ended for those meals. But as I grew and found more information, I quickly had a shift in my perspective, my way of life, and I slowly started to realise that this was going to be my calling – that I would devote myself to help animals. I realized it’s not enough to volunteer at dog shelters, I wanted to help ALL animals and I realized the first step to do that was to start from myself and my choices – so I made the choice to stop participating in every way of animal exploitation.

I became vegan when I was 13 years old and shortly after that I became an animal rights activist. Although I was really young, I remember that the only thing I was regretting was why I didn’t do this earlier – how could I have claimed to love and help animals while I was consuming the products of their suffering? I knew that there was nothing I could do to change the past so I focused on the future – I knew that being a vegan and animal rights advocate would be my purpose. I devoted every minute of every day to help animals. I will always be vegan because that is the least I can do for the animals – it’s the moral baseline for humanity, it is the only non-violent, egalitarian way of life for both human and non-human persons on this planet. When I was 13 and just started as an animal rights activist, I had a vision that the whole world will be vegan if I continue spreading this message – most people called me crazy and of course – young and naive. Well, 9 years later, I still have the same vision, but now I don’t care if most people think I’m crazy, because it’s not about them. I look into the eyes of pigs, chickens, cows and I’m reminded why I do it. And in those moments, those moments of friendship and respect between a human and non-human, I’m sure we can achieve this “young and naive” vision of a vegan world. And if you still think it’s crazy – go on and spend some time on an animal sanctuary, look into their eyes and try telling THEM a vegan world is not possible. ~ Mariana Cerovečki, Croatia 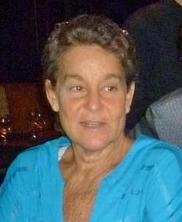 Ms. Katz has chosen the name ‘Butterflies’ and goes by that name. To her, it represents a reminder that we too can metamorphosize into our higher selves. She stopped eating animals when she was 12 years young, pre-internet, upon first learning that meat was a dead animal. She became a vegan at age 21 the very moment she was first introduced to the philosophy by a magazine of The American Vegan Society. Butterflies has been an unwavering vegan of 36 years and has been an activist for decades. She had her own column in The Vegan Voice Magazine – Australia (no longer publishing) and has written for various worldwide magazines for decades.