This week we welcome Paul Graham to the blog. Paul is author of the eBook “Eating Vegan in Vegas: If It Can Happen Here, It can Happen Anywhere,” available from Sullivan Street Press. This fascinating book is the story of Paul’s 365-day challenge to eat one vegan meal per day in a restaurant in Las Vegas. For today’s blog, Paul discusses his own vegan journey and how he has witnessed the vegan movement take hold in the unlikely city of Las Vegas.

I became a vegan in Las Vegas six years ago.  That would be hard for a lot of people to imagine; it was even a little hard for me to have imagined back then.  I had moved to Las Vegas almost 10 years ago after having lived my entire life in Northern California, where more than a few vegetarian and vegans were known to roam.  I had come to a point in my life where I wanted to optimize my health and after months of research I concluded that most of what could potentially ail me in the future was diet-related,  The main culprits seemed to be meat and dairy and I began the steps to make a change in my life.  It was that easy for me, and it was also that wonderful. 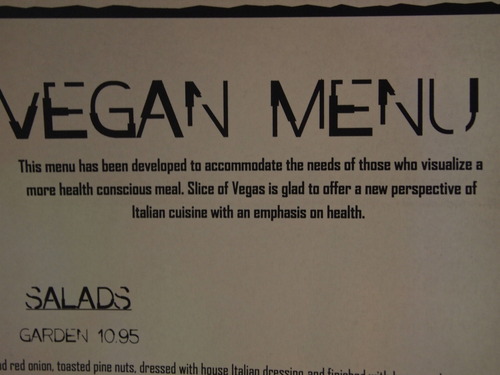 I can say for a fact that when I made this decision I did not know one vegan…here in Las Vegas or anywhere else for that matter.  I learned over those first few months of what “vegan” really meant and that it was all-encompassing to every part of our life.  It certainly wasn’t a diet, it was a lifestyle.  Somebody gave me the book, Skinny Bitch, and it changed my life forever.  Rory and Kim not only reinforced everything I had learned about the foods we choose not to eat, but also the wonderful possibilities we could eat instead that were not only life-giving, but also compassionate and cruelty-free. My eyes were truly opened to the horrors of factory farming and the ethical foundation of what a vegan is.  It became the foundation for everything that I believe and live today.

I had mastered the preparation of plant-based foods at home and had begun to venture out into this great food city of Las Vegas to see what I could find to eat.  Las Vegas had never been known as a mecca for plant-based eating, but I began to see things open up as vegan options were introduced as a regular part of the menus at all of The Wynn and Encore restaurants.  Others began to expand their offerings and I saw a shift begin to take place.  I have always been a difference-maker in everything I have done in my life and I wanted to do something to build a bridge to people to help them cross over to conscious eating and living.  I had read the book Julie and Julia and watched the movie, and was inspired to begin a blog and write about my experience every day for a year.  I decided I would eat out every day for a year and have a different plant-based meal at one of the hundreds of restaurants here and build a bridge to people to show them that it could be done and eliminate but another excuse they might have for not making a change.

In June of 2011 I began the Eating Vegan in Vegas blog.  Almost immediately I began to get responses from not only vegans, vegetarians, and the v-curious here in Las Vegas, but from people around the world.  Las Vegas is a city that entertains more than three million visitors each month and if you know that 1/7 of the world’s population is now vegetarian or vegan, there are going to many people interested in finding plant-based food here.  So for 365 days that was my mission and it was a truly remarkable experience; partly for the food that I discovered and enjoyed, but even more for the people that I met that I began to interact with on a daily basis personally and online through the blog and social media.  What I began to see was the emergence of an amazing vegan community here in Las Vegas. 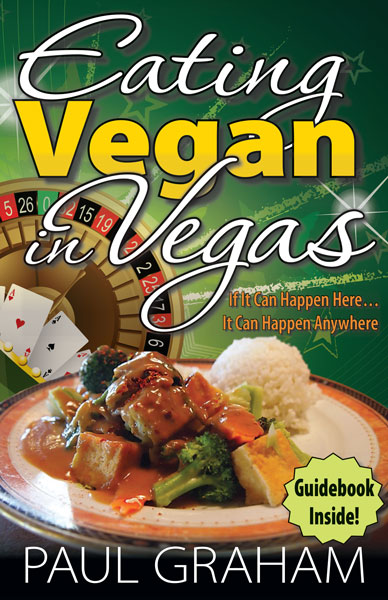 Not only did I find more than enough places to eat a compassionate, cruelty-free meal here in Las Vegas, I found that I couldn’t even get to all of them.  We sometimes have multiple restaurant openings each week and almost all of them were offering at least one if not more quality plant-based options.  We also had a dynamic all-vegan restaurant open up in Pura Vida that became a showcase for vegan eating here in Las Vegas.  Even after the 365 days were over, it was apparent that I needed, and wanted, to continue to do the Eating Vegan in Vegas blog.  I had already identified over 150 different restaurants and many bridges had been built.  A week would not go by where I was not getting messages from people that they were crossing over to conscious eating and living.  Something truly beautiful and dynamic was happening here in Las Vegas.

A few months after the initial blog project ended, I was contacted by Sullivan St. Press in New York about the possibility of turning the blog into an e-book.  This was very intriguing to me and I saw the possibility of having the information that I had compiled though a year of restaurant meals turn into a guide for the Las Vegans here as well as those others traveling to our city.  But even more than that, I wanted to tell a bit of my story so that others could know how I came to Las Vegas and what led to the change in my lifestyle.  I also wanted to explore with the readers the ethical, health, environmental, and spiritual reasons for being vegan.  Not just the where to go eat…but why you should be doing it.

That is what lead to Eating Vegan in Vegas:  If It Can Happen Here, It Can Happen Anywhere being published as an e-book in April of this year.  In the final chapter of the book I talk about where we are and my hopes for where we can go, not only as a city, but for our planet.  Change is not only possible, it is happening:  “The beginnings of real change aren’t as they tell us they are either.  It isn’t the large crowd turning in a particular direction spontaneously.  Change begins one life at a time.  Nothing encourages me more than to see a person who, for whatever reason, has finally become aware of the suffering around them that is clearly caused by their lifestyle choices.  When this person decides they can no longer live as they have been living, I am more than overjoyed.  Seeing individuals, sometimes entire families, make this decision to live more consciously means that they are causing ripples in the world that will grow beyond what they can see at the moment; they are making a tangible difference in the world.”

“When someone makes a positive change in their lives, say as a result of a spiritual conversion, it can be extremely beneficial to them, but it does not guarantee that they will bear fruit and impact the world around them.  It is up to them to take action.  Yet when someone decides to no longer eat animal products or wear or use them in any way, they have already taken action.  That decision impacts the lives of animals, the health of the planet, and it also has a direct impact on their own health and spirit.  I believe if they are walking in tandem with their own belief system it frees them to be the best possible person they can be and a true force of reformation and change.”

Great things are happening here in Las Vegas on so many levels.  We are seeing a culture begin to change.  The vegan community is exploding.  Las Vegas was recently recognized by PETA as one of the Top 10 most vegan-friendly cities in America and it is happening; it is for real.  We will be having not one, but two vegan festivals in this next year.  We have a strong activist community.  We have a wonderful health and wellness presence and we are a leader in green building and sustainable practices.  There is a dynamic spiritual community growing as well.  Our monthly Las Vegan Eatz Dinner Club is selling out each month with 60-70+ people attending each month and it is a truly dynamic gathering of people that are all doers and making a difference.  I think they are one of the most special vegan communities in the country and we are seeing change happen in lives and in the city.  The feeling is palpable.  People visting the city are feeling a difference as well.  I know that this is a key city because the country and the world come to us but we are also now beginning to come to the world.  We know that if it can happen here, it can truly happen anywhere. 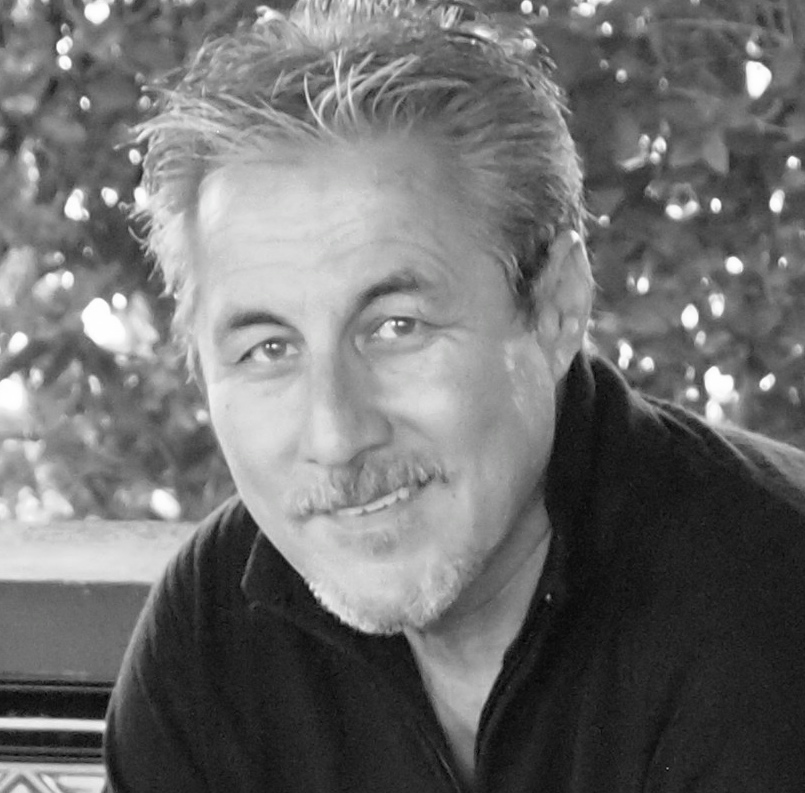 Paul Graham has an eBook entitled Eating Vegan in Vegas: If It Can Happen Here it Can Happen Anywhere that is available through Sullivan Press at www.eatingveganinvegas.com  He has a regular blog Eating Vegan in Vegas, which can be found at www.eatingveganinvegas.tumblr.com.  Paul also writes a weekly Sunday column, Being Vegan, for the Las Vegas Informer and its sister publications.