For the first time ever, New York City has someone in City Hall who is serious about making things better for the carriage horses. Mayor Bill de Blasio took office on January 1, 2014 with the promise to shut down the inhumane and unsafe carriage trade. He says “it’s over”- but is it? 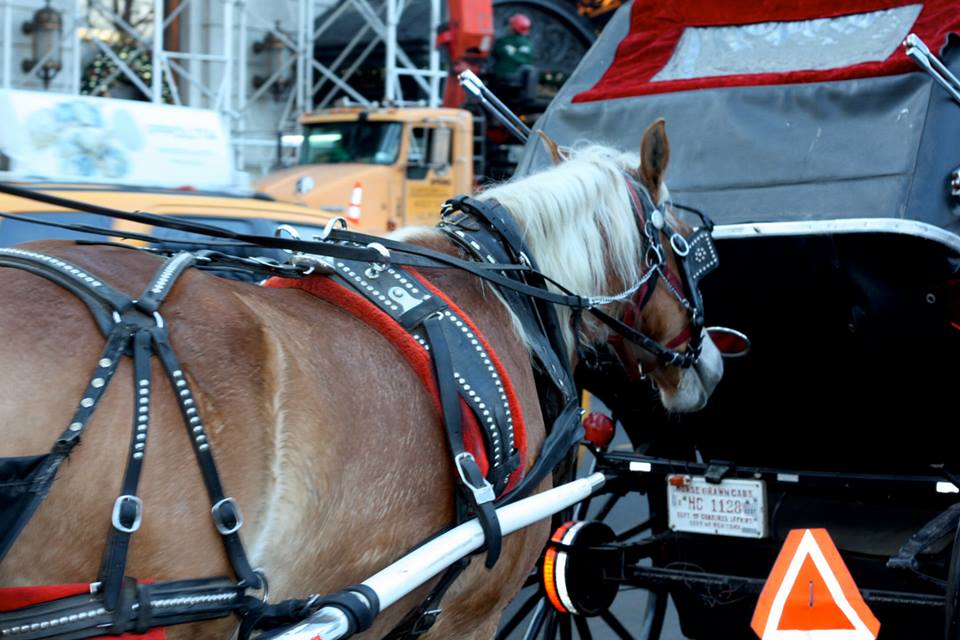 Ban of The Horse-Carriage Trade in New York City

NYC: The elections are over but the dust is still settling and we are still waiting to see what will happen with the horse-drawn carriages.

For the first time ever, New York City has someone in City Hall who is serious about making things better for the carriage horses. Mayor Bill de Blasio took office on January 1, 2014 with the promise to shut down the inhumane and unsafe carriage trade. “It’s over,” said Mayor Bill de Blasio two days before his swearing in. “We are going to quickly and aggressively move to make horse carriages no longer a part of the landscape in New York City. They are not humane. They are not appropriate to the year 2014.”

MEDIA LIES: As expected, the carriage trade and their supporters in the media are beside themselves spreading disinformation – lying and making it up as they go along.    They have to do that because if they were to tell the truth, the drivers would not have any support. The media has thrown caution to the wind and embraced the “downtrodden blue collar immigrant carriage driver as a working class hero.” Don’t believe it.  It might appeal to people who do not know the facts – but there is no truth to it. The drivers in their cash only business (no one knows how much the industry contributes to NYC tax revenue) are hardly in that category, often raising money to pay hundreds of thousands of dollars for the coveted medallion (there are 68), spending on high-cost lobbyists, PR consultants and lawyers, and living quite well.  Several of them own more than one lucrative medallion. Please don’t buy the sob story.

The media appears to like the status quo and must feel threatened by change. They also believe virtually everything the drivers tell them as they happily report it to the world. This begs the question of what is going on in journalism schools. Don’t they teach fact checking or real investigative journalism any more – or is it just about money because Yellow Journalism is what sells papers and brings people to web sites?

SUBJECT OF CONTROVERSY FOR YEARS: The horse drawn carriage trade has been the subject of controversy for many years. But it has always enjoyed the unconditional support of past administrations and it seemed unlikely that there would ever be any real improvements, let alone a ban. The last mayor – Michael Bloomberg  – was very supportive of the carriage trade, resorting to fear tactics saying that if the horses were not working, they would be sent to slaughter. His daughter, Georgina, a world class equestrian, is opposed to the horse-drawn carriages but could not successfully influence her father. Our last Council Speaker was indebted to the Queens political machine, which strongly supports the horse drawn carriages. Another Speaker who was in office for many years has relatives living in Sicily who own carriage medallions in NYC. We have had a Deputy Mayor who was married to a carriage horse lobbyist. And everyone looks the other way so the laws rarely get enforced.

WHY THE BUSINESS NEEDS TO BE SHUT DOWN: These slow moving, flimsy conveyances do not belong in the heavy congested streets of NYC, which is always an accident waiting to happen. Horses are prey animals and are predictably unpredictable – they spook easily and can bolt into traffic causing mayhem. These sensitive animals become unwitting weapons who can kill or injure themselves or passersby. Human deaths have happened in other countries and if this business is allowed to continue, it is only a matter of time before someone is killed here. 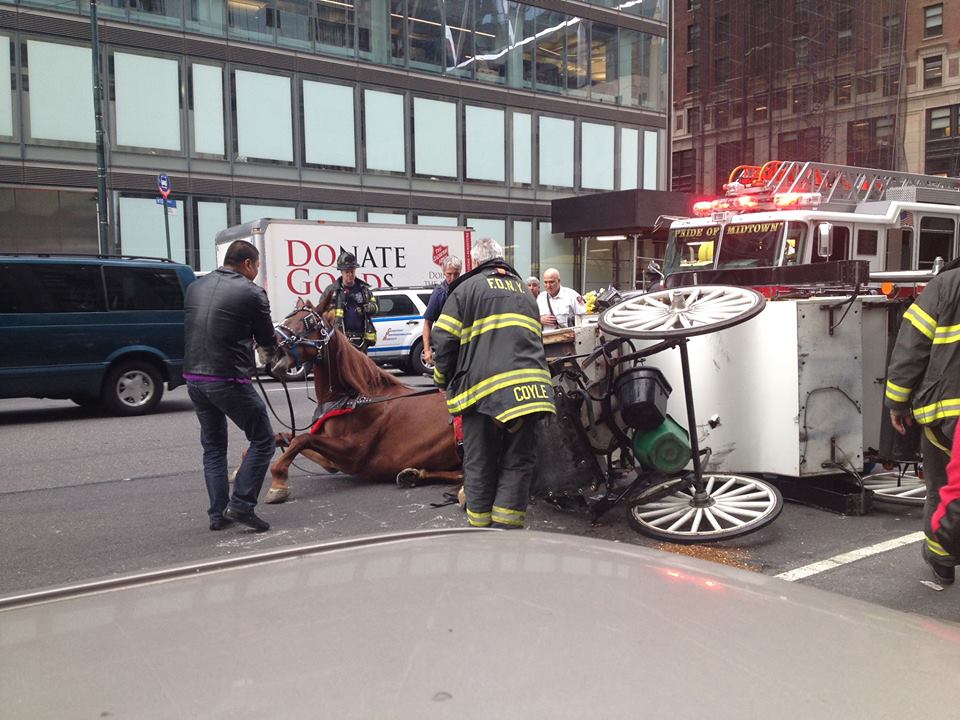 The horses work nine hours a day, seven days a week between the shafts of their carriages where they do not have the freedom to scratch an itch – something everyone takes for granted. During the holiday season when the drivers are busy, the horses are worked to exhaustion – never resting. At other times of the year, when there is little business, they wait at the hack line bored, stomping their hooves until they get yelled at.  The more fortunate ones just fall asleep. But they all have that disinterested faraway look as they stand dispirited while their drivers ignore them, often shooting the breeze with their cronies.

They live in multi-level drab and dark stables in upper floor stalls that are less than half the size of what experts recommend. They are accessed by a steep ramp. The horses have no turn out to pasture – no place to graze and socialize with the other horses. The stables have one means of egress and if there were a fire, the horses living on upper floors would not be able to get out. It is a tragedy waiting to happen. 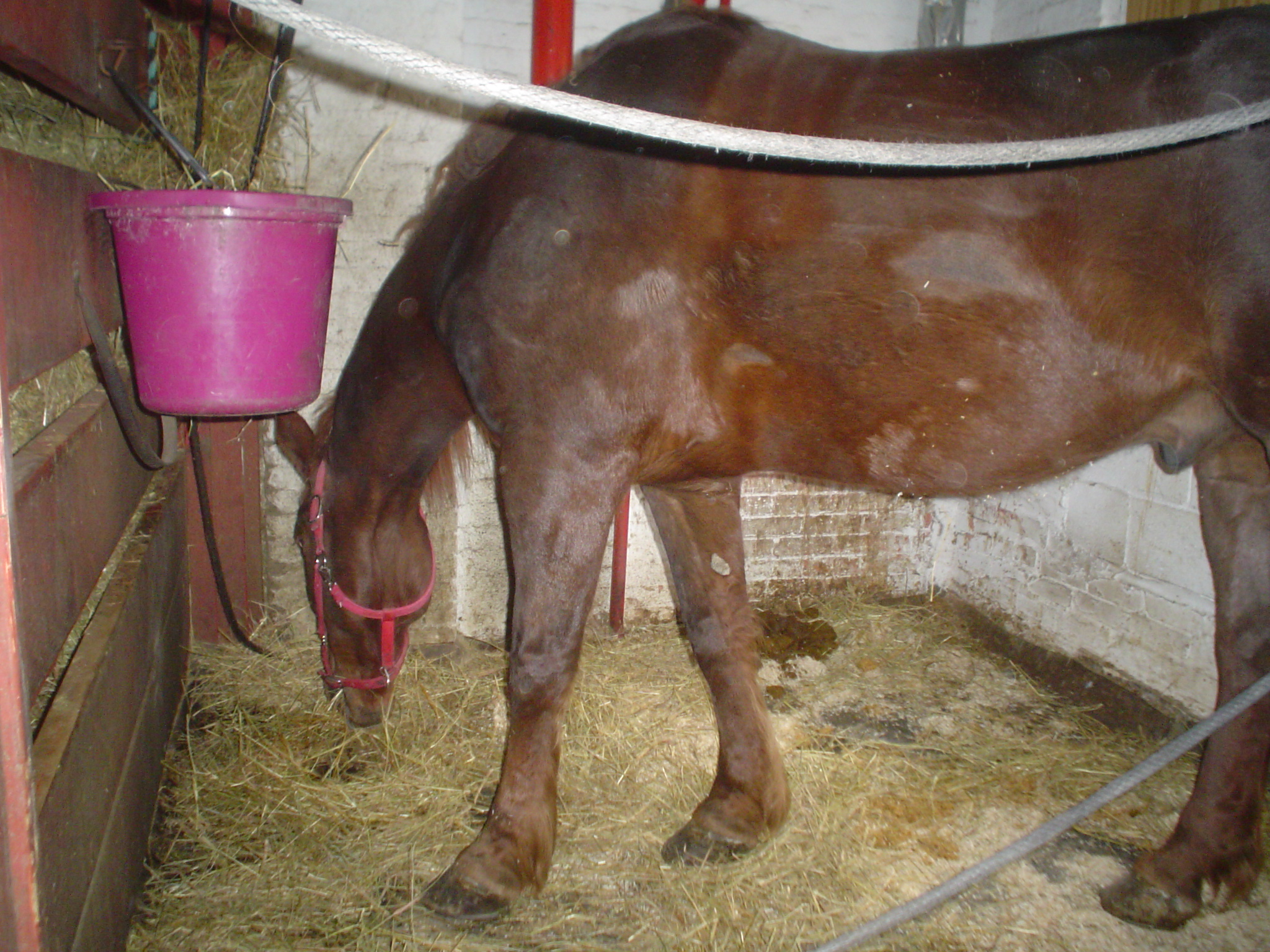 On December 20th, a driver was charged with animal cruelty for working his lame horse for four days. The horse, Blondie, had thrush on one hoof. Thrush is often caused by standing in filthy urine soaked straw bedding. This horse was from Clinton Stables. We wonder why the owner and stable manager were not charged and why no one from this stable noticed this lame horse and stopped the driver. Sure they love their horses – just not enough. Money is more important.

Although the media and the trade like to tout the required five-week furlough – that means for 47 weeks of the year, the horses only get to see the lush grass of Central Park as they pull carriages along the road – but never get to romp in it. In  2011, Pam Corey, former ASPCA equine vet, was quoted in the NY Post as saying that many of the horses returning from this so-called vacation, look worse than when they left. We have also heard that many do not get enough to eat and are also rented out to the Amish farms. Some “vacation.” Unfortunately, the Department of Health does not require a listing of these farms, nor does it require inspections.

JOBS ISSUE: The job issue deserves some realistic discussion. Many people have lost their job in NYC – ranging from city workers, private corporations, and people who lost their jobs due to redevelopment and gentrification of neighborhoods. It is not pleasant but it is a fact of life. None of these people had a new industry created for them.

Yet the carriage drivers who have enjoyed an entitled existence and favoritism from government have turned down two proposals – the vintage antique electric cars and retrofitted carriages that would reuse the existing horse carriage. They refuse to understand that their obsolete business has come to an end and it is time to move on.  The City must stop being held hostage by this very small group of people, which totals no more than 150. It is not fair to all those who have not gotten breaks and entitlements.

We are also tired of the media reporting on the “fleet of electric cars” that will provide jobs for the drivers. The cars do not exist and probably never will because they are a very risky investment and much too expensive costing approximately $12,000,000. Besides, the drivers do not want them.

The drivers should be given an ultimatum when legislation banning this business goes through. Either leave quietly or agree to the retrofitted carriage. Maybe the City can pay for the retrofitting in exchange for the horses, which can be placed through the Global Federation of Animal Sanctuaries.

So we wait and wonder just like everyone else. And we hope that Mayor de Blasio does what he promised – that it must be an unconditional total ban and it must happen soon.

This is, after all, why we voted for him. 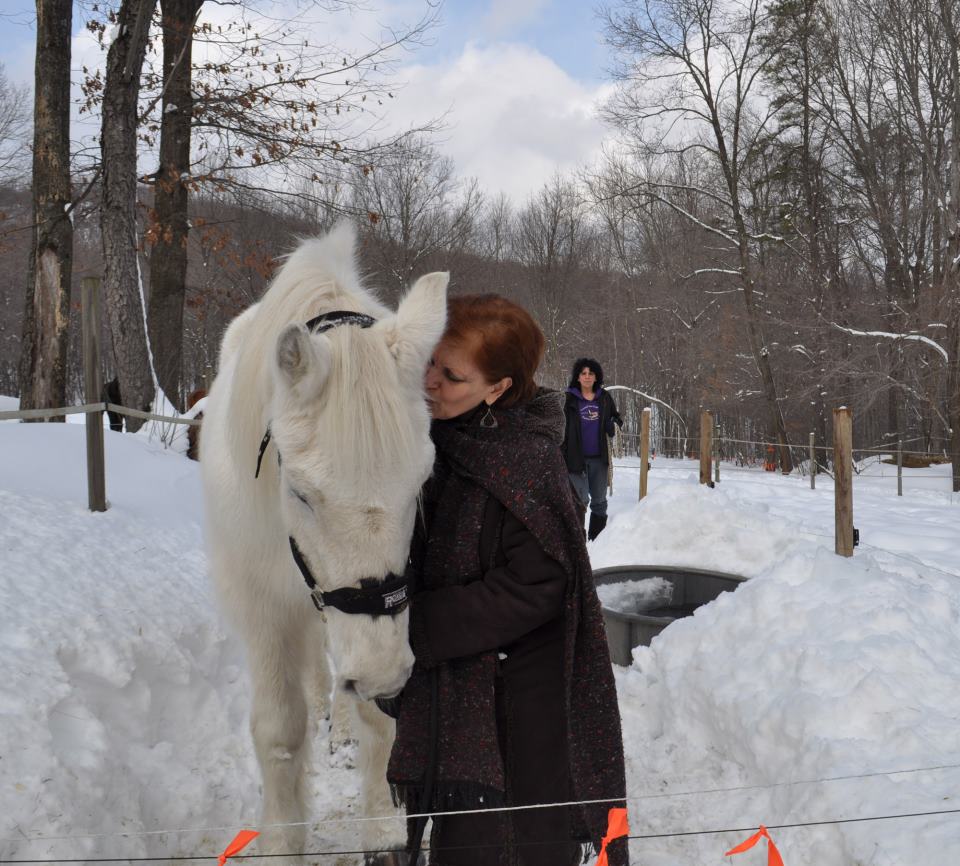 Elizabeth Forel is the president of the Coalition to Ban Horse-Drawn Carriages in NYC, which was founded in 2006 in response to a horrific accident involving a spooked carriage horse who was killed. A long time vegan and advocate for all animals, she has been involved with the carriage horse issue since the early 1990s. She is the author of many articles and opinion pieces on this topic, most of which can be found on the website www.banhdc.org