Please enjoy the following excerpt from Saryta Rodriguez’s debut book, Until Every Animal is Free, which was released by Vegan Publishers on October 1st, 2015. This excerpt comes from Chapter Seven: Liberation as Autonomy.

Central to the liberationist mentality is the notion that all sentient beings have a right to autonomy over their own bodies. What some modern animal rights advocates fail to realize is that true, full-fledged bodily autonomy is a privilege reserved solely for wild animals. Through years of domestication, humans have regrettably disabled countless nonhumans from ever experiencing true autonomy.

How can that be possible? Even if, say, dogs, cows, and chickens have all been domesticated for thousands of years, wouldn’t simply letting them go—allowing them to live freely, without being exploited—mend the broken fence? Can we not return this stolen autonomy to its rightful owners?

Not quite. Truth be told, many of today’s domesticated animals exist specifically because of domestication; in other words, they were bred. Therefore, they were born into a system of domination from which they cannot escape; from their very first breath, they were not autonomous beings but rather property. Abandoning this notion of animals as property is by no means a new idea; however, our movement has, in an uncharacteristic display of optimism, so far focused far more heavily on freeing the domesticated than it has on ending domestication once and for all.

Consider our horseman’s question from earlier: “What do you do with a horse?” A fundamental point of the ideal reply is that he should not only allow the horses he lives with to live as freely as possible, given prior domestication, but also that the caretaker should not breed them. He himself, in an effort to adhere to the ideals of animal liberation, would have to reject domestication as an option, and central to rejecting domestication is halting the breeding process. 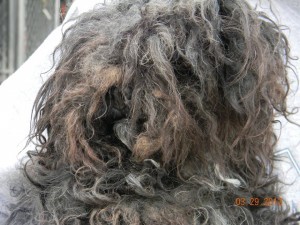 Puppy mill dogs are bred excessively, receive no vet care or socialization, and are seldom groomed. (From ChicagoNow.Com)

The victims of companion animal breeding, to use another example of how autonomy impacts liberation, are not only the mothers, whose bodies are exploited and thus who are never allowed to experience autonomy, but also the pups who are treated as commodities from the very moment of their births. Their position upon entering the world is immediately one of dependence.

Puppy mill pups are often crowded into cages stacked on top of each other– much like battery caged hens. (From MichiganPuppyMills.Com)

While countless loving and lovable dogs exist in shelters around the world, some people still pay top dollar for a young “purebred”—a dog who was designed prior to birth to maintain certain attributes considered desirable by “pet owners” who regard their companions as status symbols or showpieces rather than friends.

The closest moral equivalent from a human perspective that I can surmise is for a family to mate exclusively with blue-eyed people to ensure the eventual birth of an exclusively blue-eyed generation.

(This does, of course, happen by accident from time to time, according to region; some regions just host a higher percentage of certain physical traits than others. That said, to engage in this behavior intentionally—to exclude all other potential partners in favor of blue-eyed partners because it has been culturally dictated that blue eyes are somehow “better” than brown or hazel eyes—is evocative of a fascist, sci-fi nightmare.)

Does this mean we shouldn’t bother to free the already domesticated? Certainly not. We owe it to them to try, but if we truly want to see a liberated world for all animals, domestication— and its primary method, breeding—must be eradicated. The liberationist community must prioritize this as much as it prioritizes dispelling the Humane Myth; in fact, the two are inextricably linked. The Humane Myth encourages the uninterrupted perpetuation of domestication by implying that there is a “good life” to be had for animals who are domesticated—a life good enough to justify permanent removal from their natural state and irreparable loss of autonomy.

Depending on what you choose to compare it to, anything could be labeled “good” or “bad,” but these animals deserve to enjoy the same natural state of autonomy into which we humans are born (or those of us lucky enough to live in “free” societies, where human slavery is illegal)—to be born as creatures out in the world, exploring and learning from life itself. Not confined, not trained, and not used. Even those who have been rescued, and will live out their remaining days at animal sanctuaries, will never be truly free, as they are ever-reliant on their caregivers for basic needs, which, in the wild, they would have learned to fulfill on their own. These animals do not have autonomy over when or what they eat, how far they can travel, and a host of other life choices we free beings habitually take for granted. 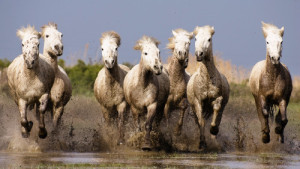 The life horses deserve to live.

In an interview published on the animal-centric blog AR Zone, Lee Hall—lawyer, animal advocate, and author of the book, On Their Own Terms: Bringing Animal Rights Philosophy Down to Earth—highlights another of many means through which the Humane Myth perpetuates human domination: “…expanded cages and pastures take habitat from free-living animals.” In other words, by framing larger cages as a “right” for domesticated animals, humans not only allow them to remain caged—maintaining their status as “property” and denying them any true autonomy— but also actively strip even more nonhumans of autonomy by appropriating their space and resources for industrial purposes.

How can we hasten the abolition of domestication? In On Their Own Terms, Hall makes several promising suggestions. One of these is for the Animal Liberation Movement to become further involved with environmental legislation. Owing to our horrendous destruction of habitats worldwide, even animals currently in The Wild are being crushed under Human’s heel. Aside from looking inward at the animals we exploit in more obvious ways, such as pigs and chickens (and standing on the platform of their “rights” to strip wild animals of autonomy by widening jail cells), we need to also look outward and ensure that those who were born free have the ability to stay free and don’t wind up trapped in our ever-expanding territory. 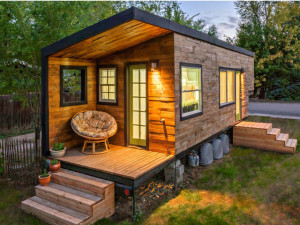 A 196-square-foot house. (From CountryLiving.Com)

One intriguing possibility for a future in which we humans take up less space and ruin less land lies in the emergence of “tiny houses”—houses measuring under 200 square feet. Popularized as an economic measure for young couples and those looking to downsize, some proponents of the “Tiny House Movement” chose—and continue to choose—to build and live in tiny houses for the sake of environmental protection. The documentary TINY: A Story about Living Small (2013) follows a couple striving to build a tiny house from scratch, with no construction experience whatsoever. As their story unfolds, it is interlaced with the stories of others who have engaged in this process as well—each with limited budgets and limited, or often no, experience.

Many of those interviewed in the film spoke of how we humans take up such a gargantuan amount of space given our relatively small size, and with more of us springing up every day there simply isn’t enough room—nor is there any real need or advantage— for all of us to aspire to the McMansions of which the American Dream was once comprised. The Tiny House Movement is revolutionizing the status quo, spinning the pitying expression, “It’s ‘okay’ to live modestly,” into a more encouraging and prideful message: “It is responsible and ethical to live modestly.”

Whereas the Mansion has for ages served as a status symbol— the symbol that one has “made it,” i.e., that one has money to waste—living small offers us a new, more significant status symbol: an emblem of our respect and consideration for other creatures, as well as our planet. It can no longer be taken for granted that people who live small do so out of necessity; rather, it is becoming more and more socially acceptable for people to do so by choice.

Veganism is also fundamental to the elimination of domestication. Many vegans talk about the lives they are personally saving by abstaining from animal byproducts and eschewing forms of entertainment and fashion that exploit animals, but there is a larger endgame here even than these countless lives “saved.” That endgame, that highest priority, is that the vegan lifestyle has the potential to end animal domestication by depleting the demand for anything for which domestication is a prerequisite.